Winery locations and beautiful scenery often go hand in hand. So why not see it all at a slower pace, from the seat of a bicycle instead of behind the windows of a car or bus? Our first in a series on biking trips in wine country is the Finger Lakes of New York. 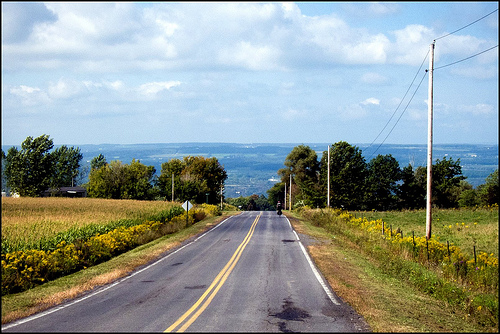 The 11 finger-shaped lakes area of upstate New York is the largest wine growing region east of the Rockies, but you’ll often have the roads mostly to yourself.

Jacki Lewis chose a Finger Lakes biking trip with WomanTours because she wanted something scenic that was close to her Toronto home, and she liked the focus on women’s history in the mix. She says the tour and the incredible beauty of the landscape surpassed her expectations. “I wasn’t sure I’d really get something luxurious, but I was pleasantly surprised at the quality of the lodging–one night we even stayed in a chateaux! Everything was unbelievably well-organized from start to finish.”

For her, the organized tour with meal stops and luggage transfers made the trip hum. “It’s remarkable to travel on a bike from inn to inn and not have to worry about anything but yourself.”

Lauren Blau, who was on the same tour, says this a great first biking destination. “In just four days you get beautiful, varied scenery-vineyards, lakes, farms, and cottages with a low level of vehicle traffic,” she says. “Plus there are great local inns and B&B’s to stay in, with delicious food.” 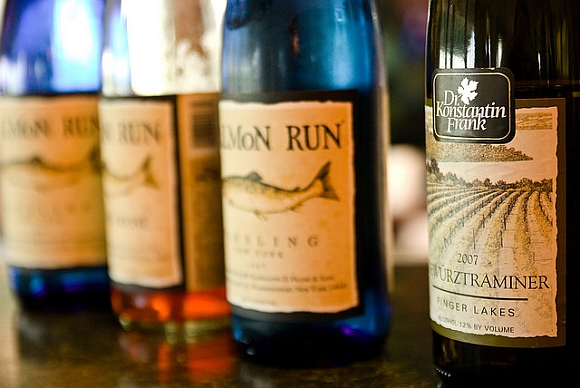 Mike Evans booked a tour with Classic Adventures after his cyclist brother talked him into it, even though he says, “I hadn’t been on a bike for 30 years. I spent two months training to get ready because we committed to an 11-day trip.” He was impressed with the vistas, all the sightseeing options, and the quality of the lodging. “I couldn’t believe it when we pedaled up to Belhurst Castle and that’s where we were spending the night.”

Those who normally drink hearty red wines won’t find a lot to impress them here, but the whites are a different story.

Mike Evans found the change refreshing coming from the west coast and says he really enjoyed trying all the different Rieslings and ice wines. “On a few stops the winemakers gave us a tour and talked about their operation as they poured samples. It was a nice, relaxed education in wines I hadn’t tried much before.”

Classic Adventures offers the best long guided group tours, with six-day options at around $1,900 per person. For a budget option, the annual Le Bon Ton Roulet tour set up by local YMCAs is a $525 6-day bring-your-own-bike affair with public camping, luggage transport, and group meals. Shorter three- or four-day annual tours are available through Southern Tier Bicycle Club and WomanTours.